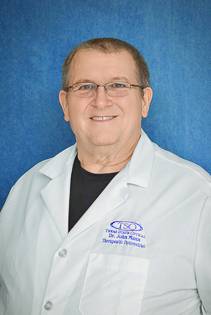 Dr. Mann was born and grew up in the Mid-west, in a town in the South-East corner of the State called Nebraska City, NE. He moved to Houston to escape the extreme weather in the Mid-West. Dr. Mann attended High School in Nebraska City and did his undergraduate work at the University of Nebraska. He earned his Doctorate in Optometry from the University of Houston in 1984. Dr. Mann has been around the eyecare field most of his life. His Uncle was an Ophthalmologist, his Father was an Optometrist and his brother practices Optometry in Nebraska. Helping people see and restore their eye-sight is extremely rewarding for Dr. Mann. This is why he chose to be an Optometrist. “From young, first-time glasses wearers, to people with eye disease, nothing is more precious than eyesight”, he states. Having great experience in the Optical field, Dr. Mann always comes in with a positive attitude and is fluent in Spanish. Dr. Mann specializes in treating Eye Infections, Allergies, Glaucoma and Dry Eye.

His professional interests include LASIK Surgery Management and Macular Degeneration.

In his spare time he likes to garden, read and spend time with his family and Grandchildren.

Choose an Appointment with:

Very pleasant experience. Made appointment online and was taken care of almost immediately.
7 months ago
- Dilkopsewa V.
Doctor Mann, Is The BEST EVER ! Doctor Mann is Very Compassion,Very very very knowledgeable and take time out to hear Our concerns about Our Vision and etc.Doctor Mann is a Great Access to Communities throughout Texas,He is very well missed and We can’t wait until He return to the office. We Have been miss you Doctor Mann ❤️The staff at the Southmore location is Awesome as well,Keep up the Awesome Teamwork.
8 months ago
- Tracey A.
Easy to make appointment and you can do the paper work online. It process things very faster when you come in. Very friendly girls that does check in and check out.
9 months ago
- Gabriela C.
The best Eye Care I have ever recieved. Everyone here is super accomodating and helpful. Staff is super nice and I saved alot of money compared to other places. This is the place to go!
10 months ago
- Juan M.
After having a horrible experience from another place I came to TSO southmore & they took good care of me. Dr.Mann very professional and nice he was able to give me the correct contact prescription I can see so much better now. Caroline Alex and Sulema were very welcoming and Courteous. I highly recommend TSO Southmore For their excellent service. Thank you so much
11 months ago
- G b.
I went in for my appointment and everyone here was so nice. Carolynn was very helpful with helping me find some suitable glasses , I appreciated her very much. Dr.Mann was very nice and super patient with finding the correct prescription for eyes.. Definitely 5⭐!
11 months ago
- Marixa
I was a new patient and I didn’t have an appointment today but I was welcomed as a valued customer. The entire staff was very friendly and professional. Dr. Mann was thorough and answered all of my questions. I will definitely make TSO my go to for my eye exams. I highly recommend TSO.
11 months ago
- NORA E. Choose an Appointment with: